Summer still lingers here so I’m catching up on writing up the last of my summer projects before I move on into my fall makes.  Earlier in the summer, I picked up a few t-shirts at the thrift store for refashions.  One of them, you already saw me re-make in my Split Flutter Sleeve hack video.  The other 3 I decided to remake with some cutout features.  I often use t-shirt refashions as a way to test out ideas and think creatively about knits.  So here are 3 Cutout t-shirt refashions for you. 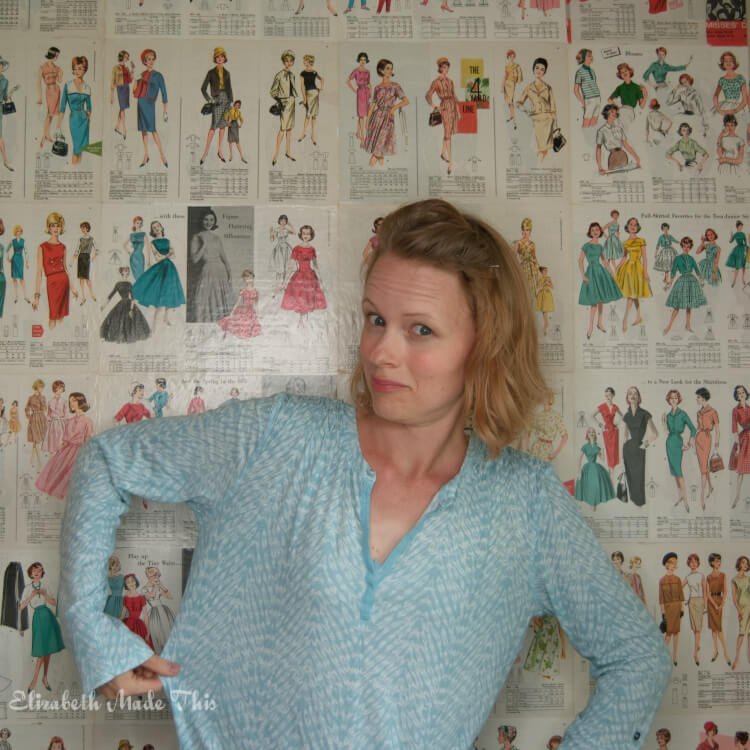 Before I show you each one, I have to show where they started.  The blue shirt is a cotton Calvin Klein tee that has a low v in the front that’s trimmed with twill tape.  There’s also some smocking on the front shoulders.  The blue is one of my blues in my color palette, and I really liked the print.  It’s not often that I find prints that are perfectly in my palette, so when I find them, I grab them. 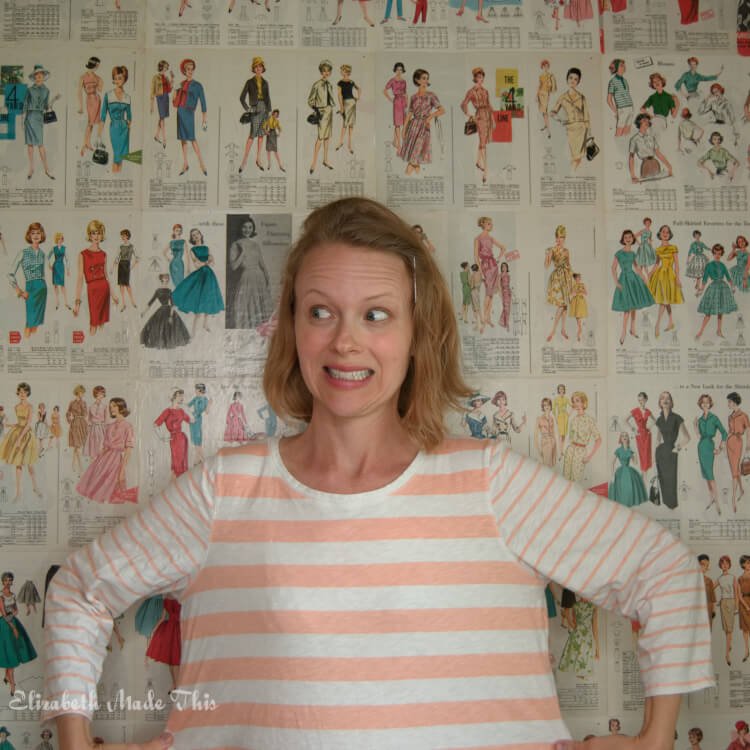 The varying stripes on this white/peach cotton tee were really intriguing to me.  I’m a big fan of Pauline and her amazing stripe creations, so I thought I’d try my hand at doing something to utilize the stripes in a way that she might. 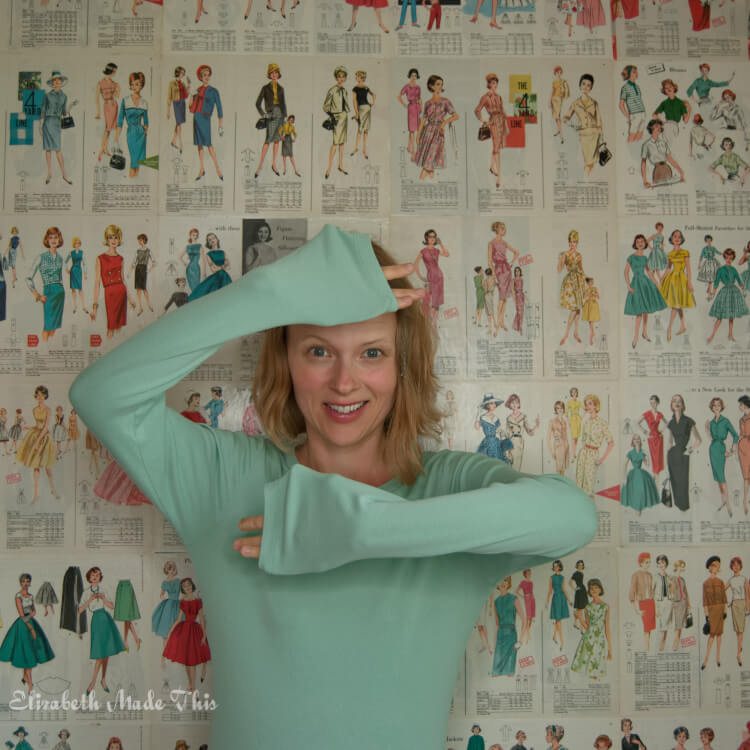 Spoiler alert on this green J Crew tee.  It did not turn out as I wanted.  It’s one of those evil cotton knits that expand when you blink at them.  As such it did not do what I wanted it to do.  I should have passed by it, but the green was so pretty, and it was J Crew so I figured (erroneously) that it was quality.  Dear J Crew, you really should do better.

Inspiration at the baseball game 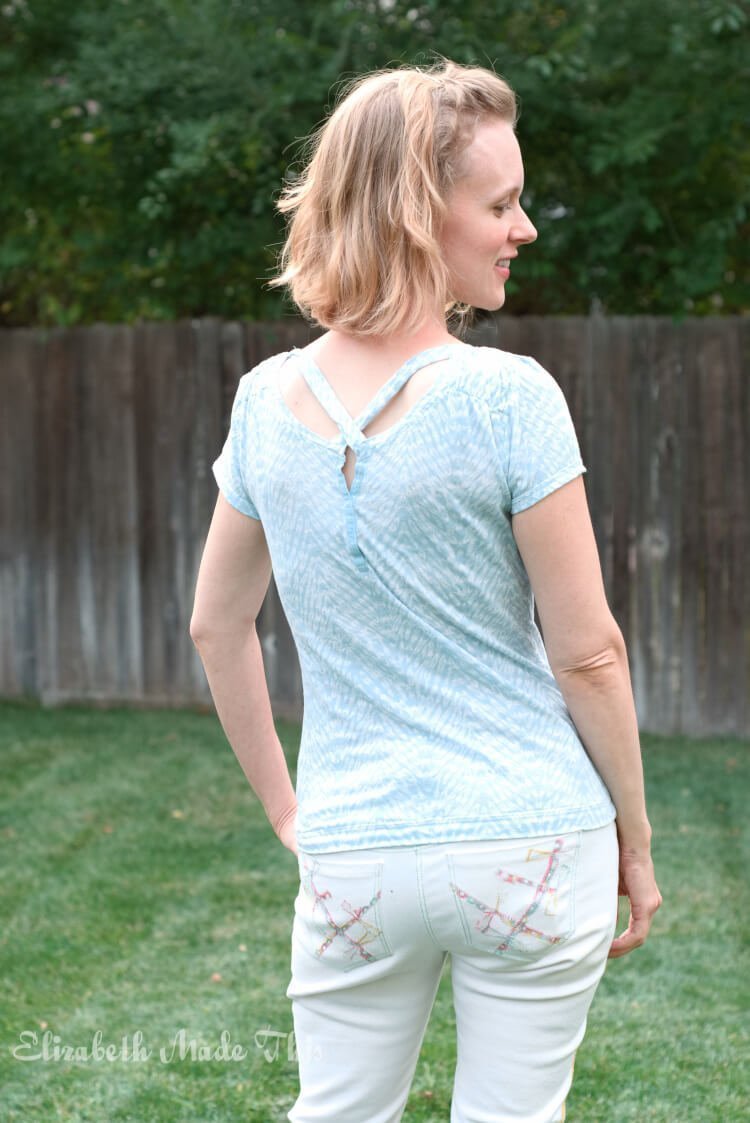 My older two boys play baseball, and there was one night we were leaving practice and I saw another Mom with the cutest tee.  It had a back low v-neck with an X made from strips of the fabric across the upper back.  I liked it so much, I scrawled a rough sketch on a scrap of paper in the car.  Do you do this when you see a cool detail on someone on the street?

The blue tee was easy to turn into a version of this.  I cut the back from the front since it already had the v-neck detail.  I also scooped out a little bit more of the neck.  The bottom of the twill tape was too low for a back (and really for a front too), so I stitched it up the now center back to a better height.

I cut a couple of 3″ strips to make into turned tubes for the X back.  Because the corners of the twill tape were a little floppy on the back, I attached one end of each of the X strips to the corners.  The other ends I attached under the new neckline after it was bound.  I pinned each of the other ends under the neckline after it was bound to the point where the X and the corners of the v-neck sat taut across the back.

The front is a simple neckline somewhere between a scoop and a crew, and I gave this one cap sleeves which have been perfect for summer.

Peach in a blender

My inspiration for this tee came from this Anthropologie tee I pinned on my t-shirt hacking board. 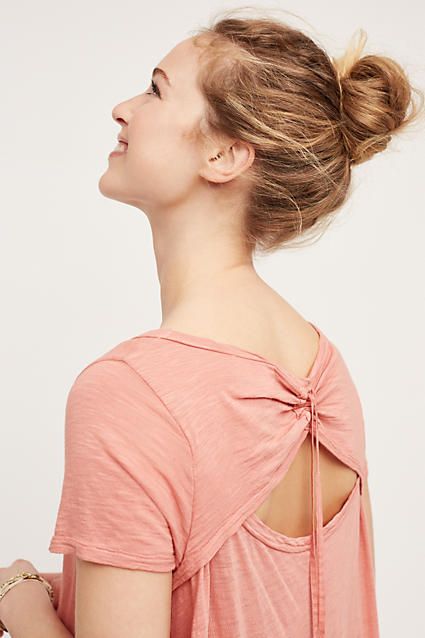 I didn’t really like the gathered portion of the back, and the ties seemed overly fussy.  Instead, I opted for a plain yoke with the peekaboo center back beneath it.  My kids really got a kick out of the peekaboo when I was in the process of making it. 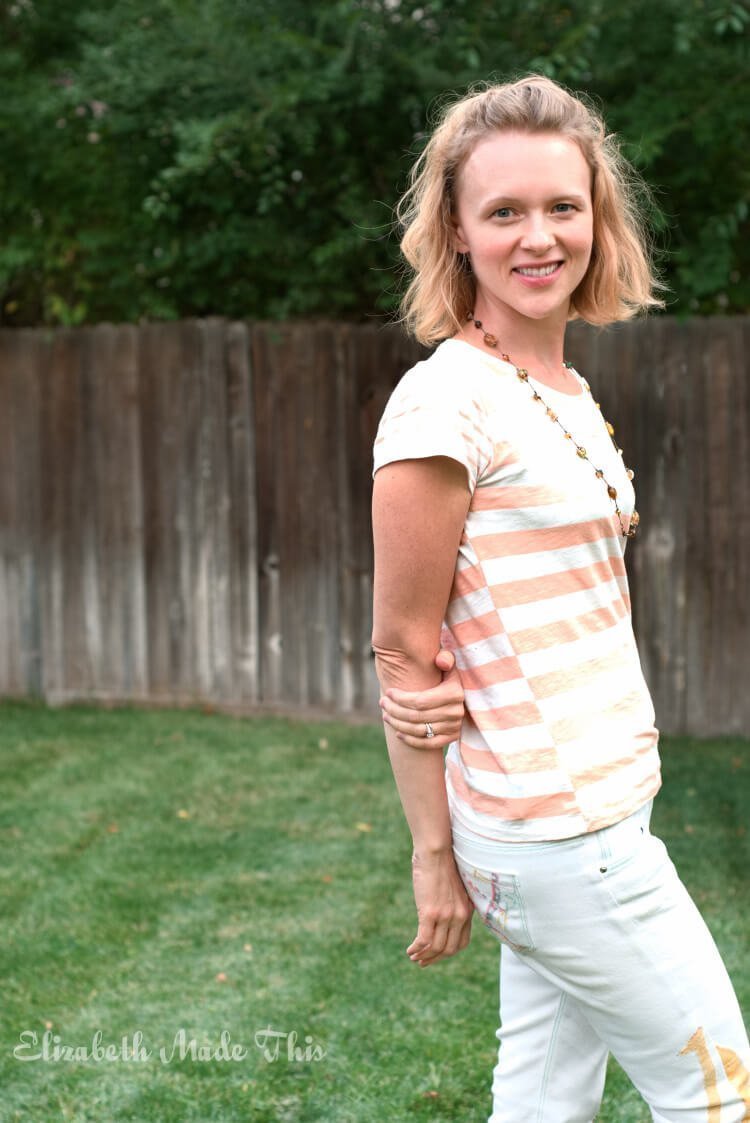 I was really lucky that I had not only a lot of extra width to deal with in this tee but a lot of extra length too.  I was able to cut the lower back with offset stripes.  They match the front on one side and are offset on the other side seam. 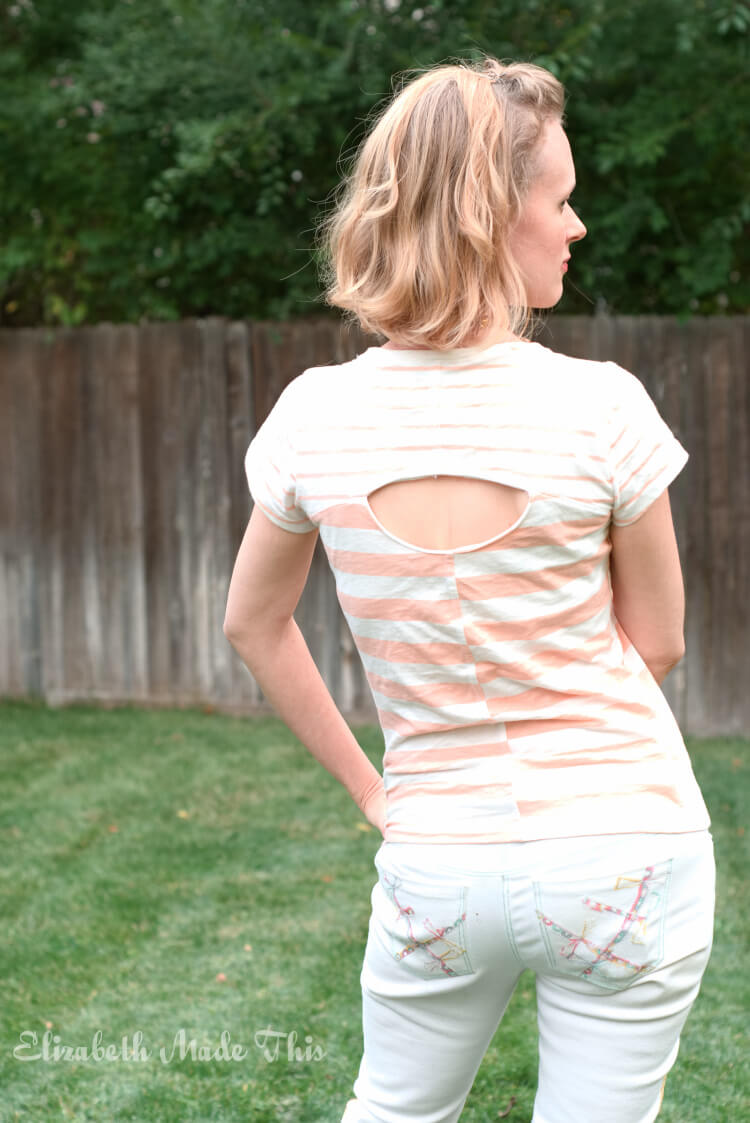 The upper back I cut from one of the sleeves, though I had to cut in in 2 pieces which I overlapped and stitched down with my coverstitch.  From the rest of that sleeve, I cut a bias tiny pocket for the front. 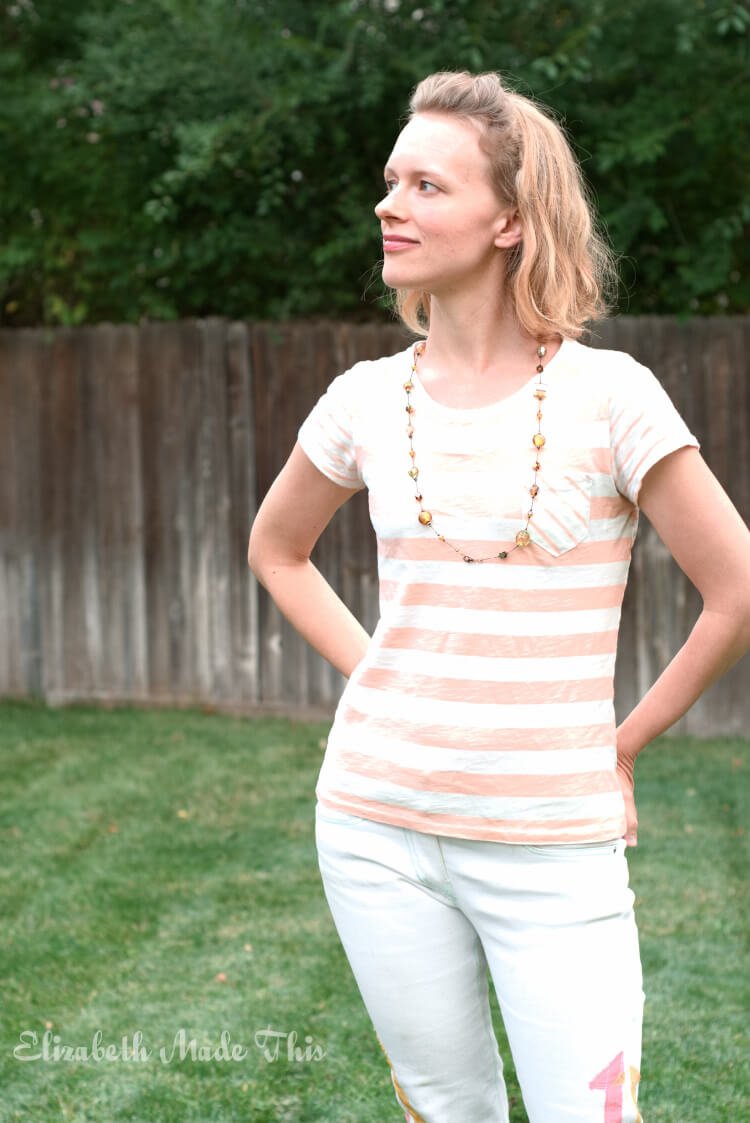 Can you believe that I could cut both of the cap sleeves from the other sleeve?  It’s not too often that I can do exactly what I have in my head in a refashion, but this was one of those times.

Cutout tank (*Not all your ideas are golden, Ponyboy.*)

So for the green tee, I wanted to do a cutout on the shoulder a bit like this Express tee. 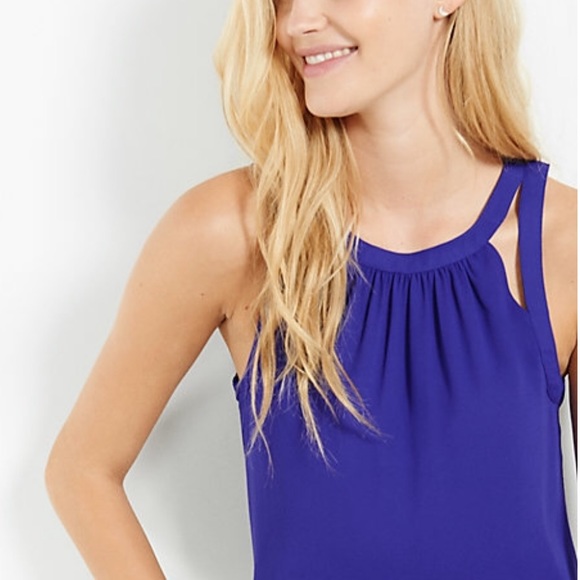 I knew that I wanted to make a bit of lattice work under the cutout, and that’s where things went south.  This green knit could not handle the extra manipulation.  It did not have the extra recovery it needed to stretch across the gap and hold well without overstretching.  You can see that the back neck is bagging out too.  This fabric had humble aspirations of being a plain basic tee and that’s it.

At first, my lattice ended up all stretched out and horrible.

@laststitch had a great post in which one of her hopes was that people could feel more comfortable posting about things not going 100% great, so here goes: this cutout shoulder on this #refashion tee is time no. 573 when I wish I had a #dressform. The cross pieces are too floppy at the moment to hold the design and the fabric stretched more than I wanted. It’s fixable, but a pile of blargh and definitely taking more time than I hoped. What’s your latest blarghy project? . . #isew #sewcialists #diyfashion #patternhack #upcycledclothing #creativesewing #elizabethmadethis #memadeeveryday 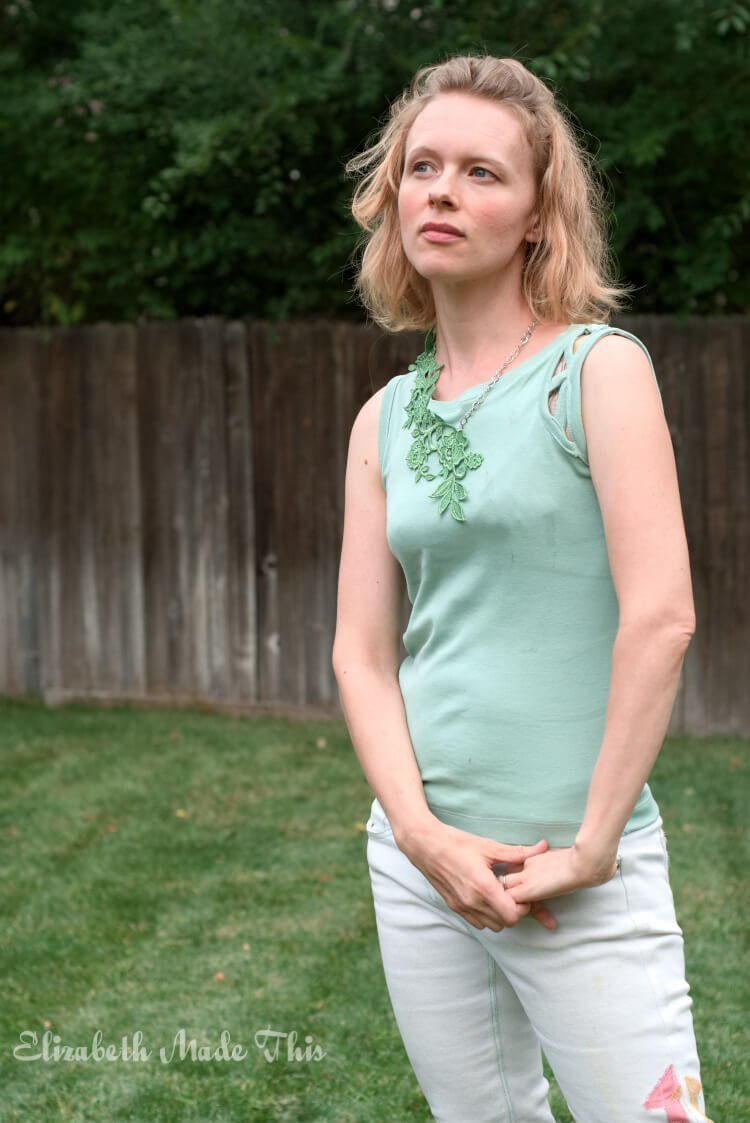 I was able to unpick it and redo the intersections so that everything sat flat.  If only I had made the left front with the cutout from the beginning too instead of binding the armhole THEN cutting it out.  I think that would have been a cleaner look.  Still, given the recovery issues with the knit, I’m not sure I would have gotten a better result. 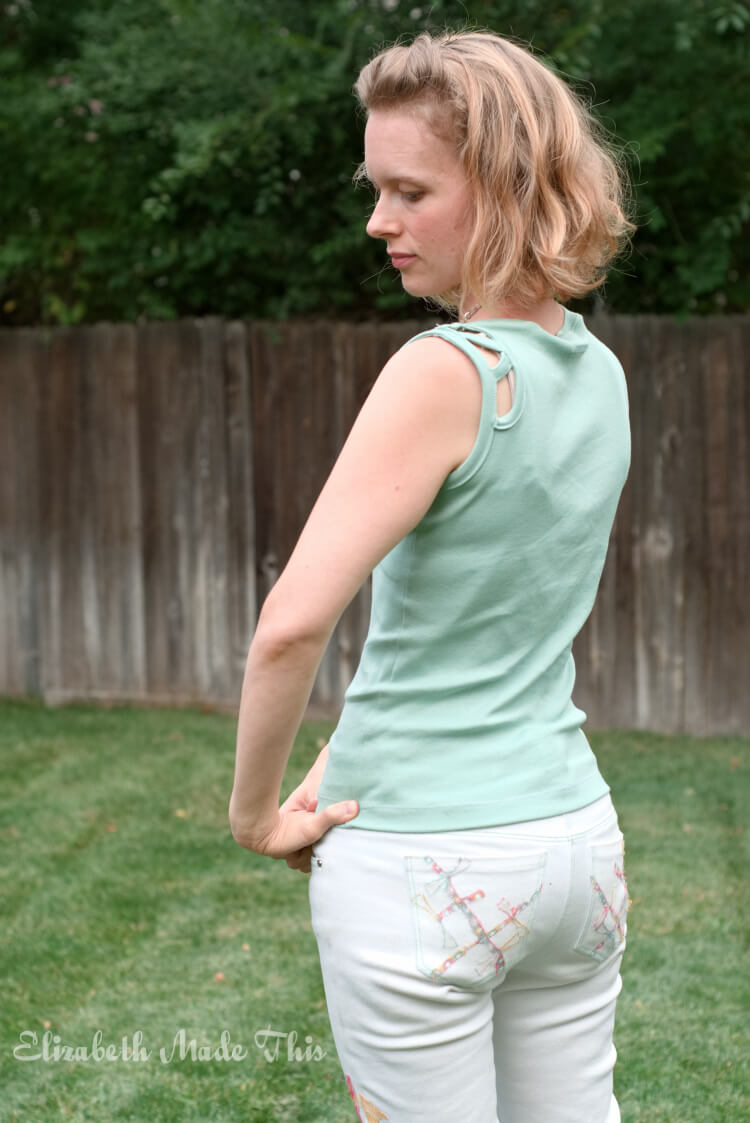 Ultimately, the tee is wearable, but it’s just not my best work.  I’d really like to try this idea out again this time from yardage in a more appropriate knit.

What the worst knit that you’ve ever sewn?  Could you salvage your project?  What did you learn in the process?

Elizabeth Farr is the writer behind the Elizabeth Made This blog where she shares helpful sewing tips, step by step sewing tutorials and videos to help you explore your creativity through sewing.  She has written sewing Eguides and patterns, been a featured teacher at Rebecca Page’s Sewing Summit and Jennifer Maker’s Holiday Maker Fest and her work has appeared in Seamwork and Altered Couture magazines.  She also created a line of refashioned garments for SEWN Denver.  When her sewing macchine isn’t humming, she’s playing and teaching violin, and hanging around a good strategic board game with her husband and 4 kids.