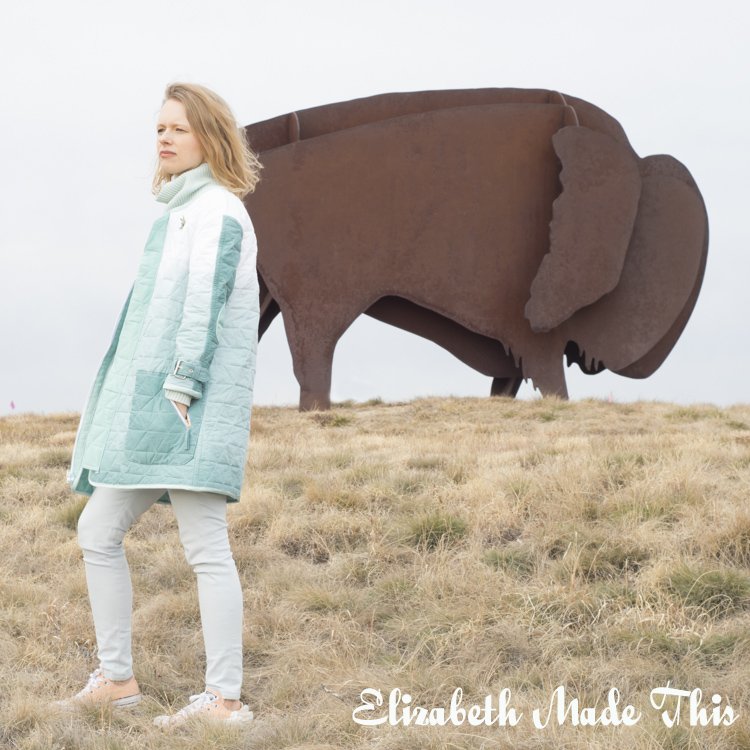 As the year draws to a close, I’ve been thinking about my general work habits a lot.  It seems my projects are either things that can be done at breakneck speed or slow, methodical affairs that take planning, precision, and ample time.  I wonder what projects in the middle of the road would look like!  This DIY quilted coat is the second type of project.  It took research, careful thought and then just a lot of hustle to complete it, and I regret no minute extra I spent on it. 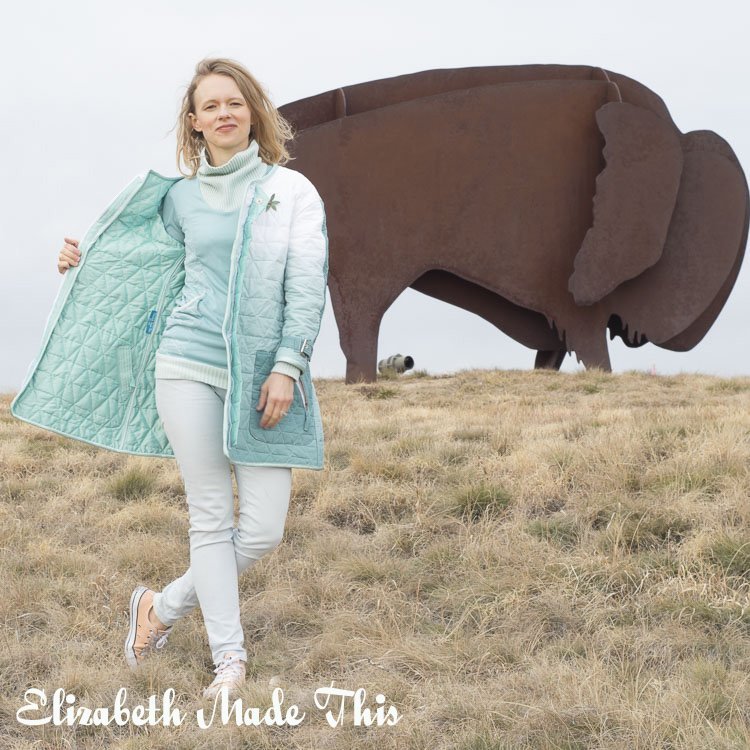 As I alluded in my last Sew Saturday Snippets post, this coat earned me my first sewing contest win through That Sewing Blab‘s So You Think You Can Sew.  For each of the rounds, we were given a mystery item which we then had to incorporate into a garment.

For round 1, we had to use this black and silver trim.  In my typical style, I bent it into chevrons and added 2 more rows of contrast on this dress.  I also fussed with the sleeves and added bells to the bottom that echoed the chevron slope.

For this round, we were given an ombre shower curtain.  There’s a lot of variation in shower curtains, but Myra and Dawn were nice to me and Melanie in giving us one that was 100% cotton.  The fact that it was all the seafoamy greens that I love made me dive headlong into this project with gusto.  It’s like the sea!

I knew immediately that I wanted to make a quilted coat with this curtain.  It was a little too stiff for a dress in my mind, so I knew it would handle the quilting well.  Also, I had the perfect seafoam green nylon outerwear fabric that had been ageing in my stash for an embarrassing amount of time.  I wish I could say how many times I’ve pulled that fabric out of my deep stash to think about how to use it.  You know those fabrics that you never find a coordinate to or that are somehow too special to use?  I can’t explain it, but that nylon has been one of those.  The sheen of it, the color, everything about it is just my favorite.  Nothing less than the perfect fabric would do to pair it with, so I just about squealed when I saw the curtain.

Initially, I wanted to do an unstructured sashiko quilted coat.  My own memory of a tiny sashiko sampler and Yoshimi the Flying Squirrels discussion on her mother’s jackets reminded me that I didn’t have time to attempt that in the 2 weeks I was given.

Instead I decided to go with a machine quilted affair.  I liked the general shape of this Gucci coat: the collarless look and bias trim of this Isabel Marant coat:

the sleeve belts and elbow patches of this Burberry jacket: 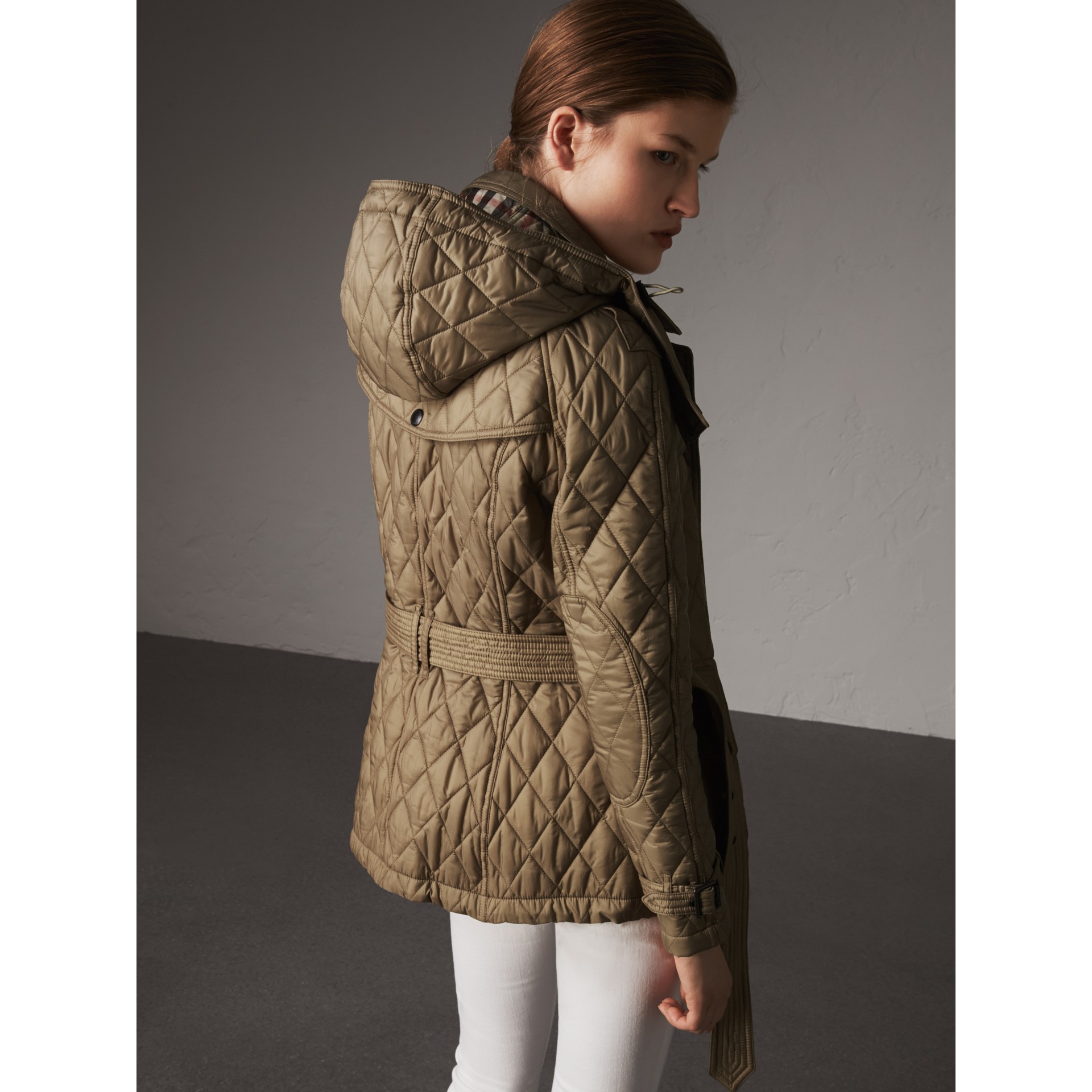 and the triangle quilting of this other Burberry jacket: 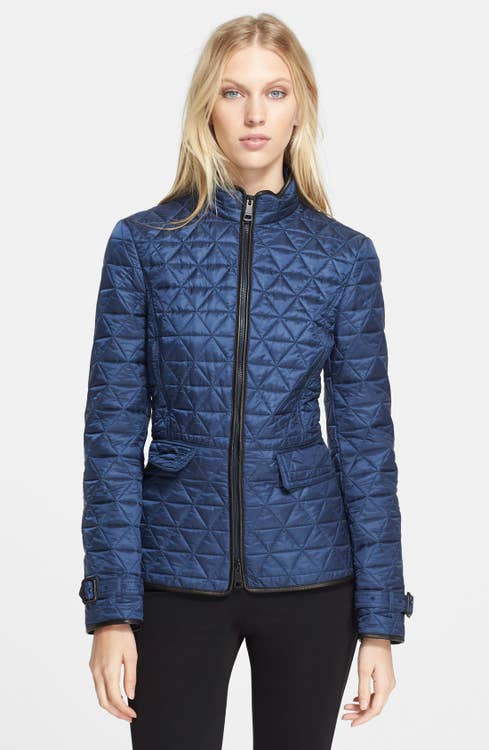 If I had had enough of the nylon, I would have added a hood.  Instead I focused on another aspect I couldn’t get out of my head.  This coat was going to be 100% reversible. 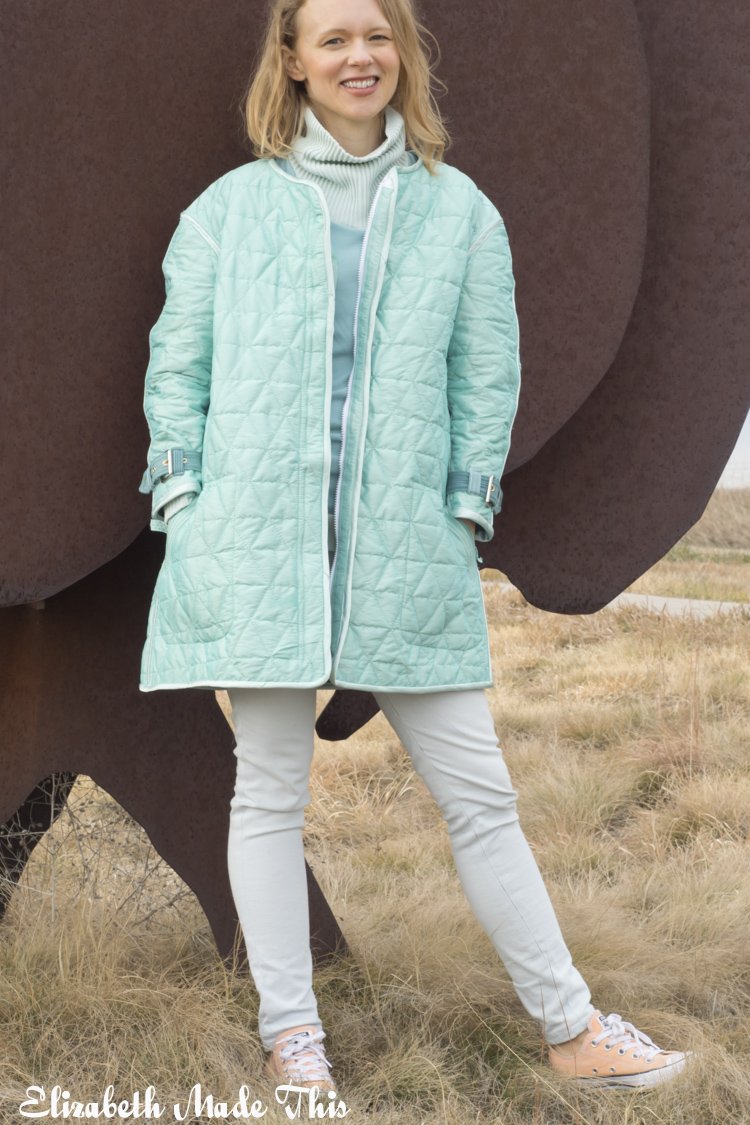 I thought about using Grainline’s Tamarack jacket for this, but I ultimately went for Burdastyle 8-2014-102.  It was already in my stash, and the only problem with it was the sleeves.  The original pattern has flared, shorter sleeves.  To reduce the width, you slash the sleeves in multiple places and overlap.  This is exactly the opposite of my split flutter sleeve tutorial, where you slash and spread the sleeve at intervals. 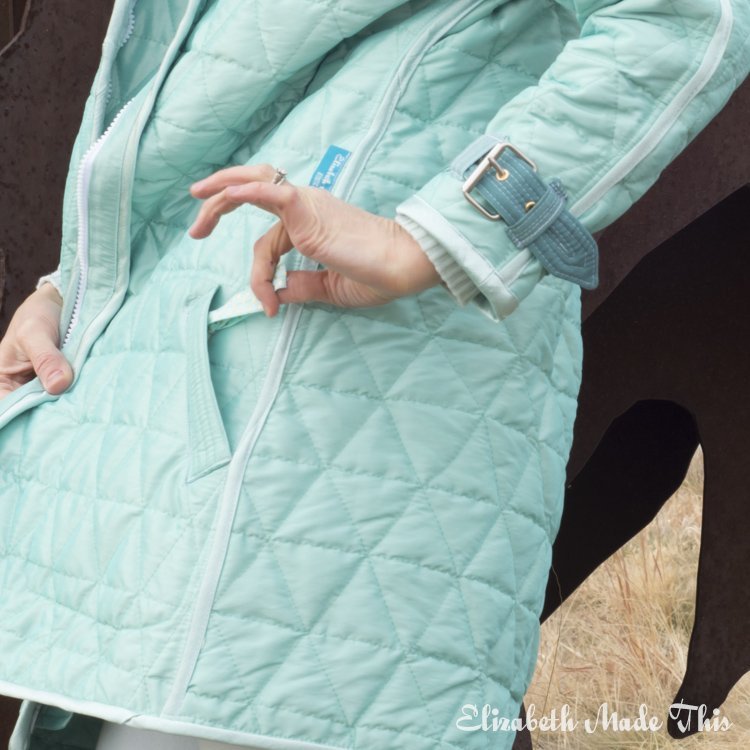 The pockets were the most time consuming part of this coat aside from the quilting.   They required some true engineering on my part.  On the seafoam side, they are zippered single welt pockets.  I added foldover elastic pulls to make opening the zippers easier. 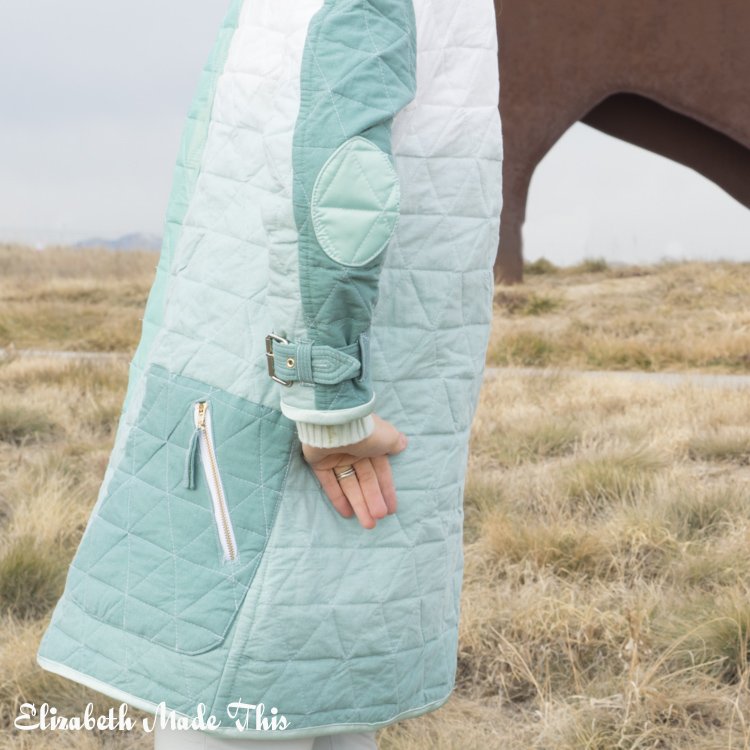 On the ombre side, the pockets are quilted patch pockets with zippered welts.  With the added zippers, I could stitch entirely around the pockets for added security.  I added topstitched strips of bias to make zipper pulls for the ombre side.  Because there’s so many layers of fabric in all of this, there was no way to have patch pockets on both sides.  So the patch pocket actually functions as the pocket bag for both sides.  If I open both zippers, I can stick my hand straight through the coat. 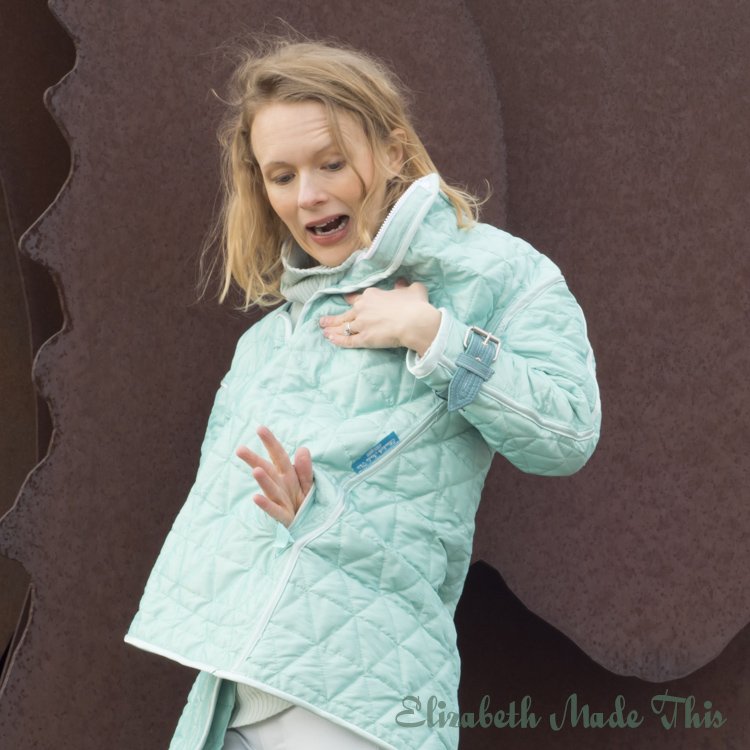 The front zipper has a reversible head on it.  It flips over the top of itself so that it’ll work on the other side.  There’s other kind of reversible zippers–those with 2 heads for sleeping bags, but I would definitely use this kind again for a coat.  My only mistake was putting in the zipper shield on the wrong side of the zipper–making it like a man’s jacket.  It’s a nit-picky thing, but there you go.  There’s a jumbo snap that closes the zipper shield at the top. 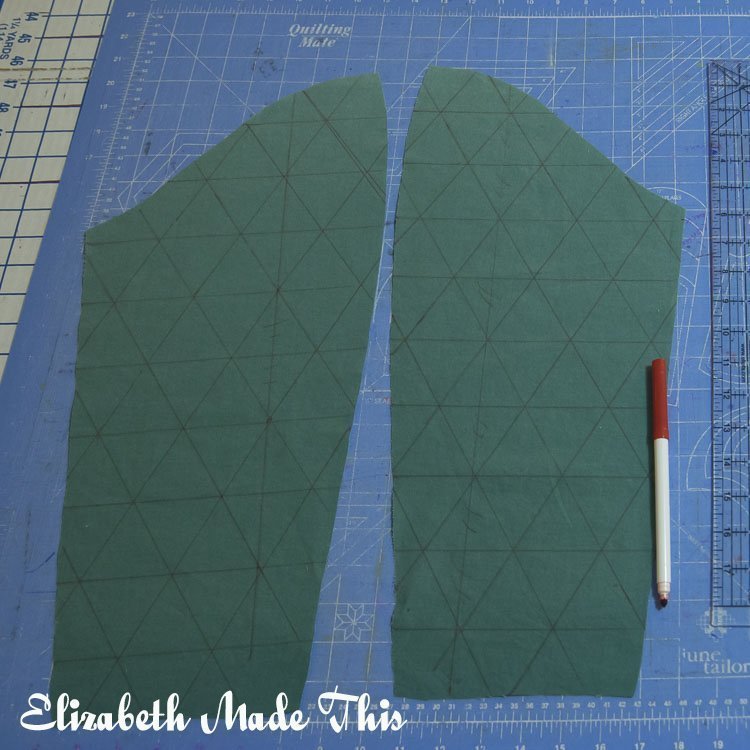 For this coat, I used Thinsulate in the 105 gram weight.  While this was really easy to work with, I think the next time, I’ll go for a little more warmth.  Thinsulate also comes in heavier weights–I think the 210 gram weight would be awesome for a true winter jacket.  As it is, my coat is warm probably down to 40 degrees.

For cutting, I cut the ombre pieces to size.  Then I used quilt basting spray to attach the wrong side of the ombre fabric to the Thinsulate and then the thinsulate to the nylon.  To make sure things didn’t shift out of alignment, I cut about 1″ extra around the ombre pieces through the nylon and Thinsulate.

Now, this time, I used the Heat and Bond basting spray.  It’s not fumey, but I have to say I felt a little lightheaded after things were sprayed.  I’m not a quilter, so I’m not super worried about getting cancer from a 1 time project.  If I ever do this kind of thing again, I will probably air out the pieces for a day.  There’s DIY basting sprays, but they involve rubbing alcohol, which is more fumey even if it’s technically less dangerous.  If you know of a truly non-toxic basting spray, I’m all ears.

Marking for the quilting is really slow.  The grainline is king, and for accurate seam matching, you really have to mark one piece at a time.  Because I was quilting with a triangle pattern, I needed 3 separate passes with the ruler: lines perpendicular to grainline, lines @60 degrees to those lines, lines to complete the triangles.  I used a washable marker on the ombre side. 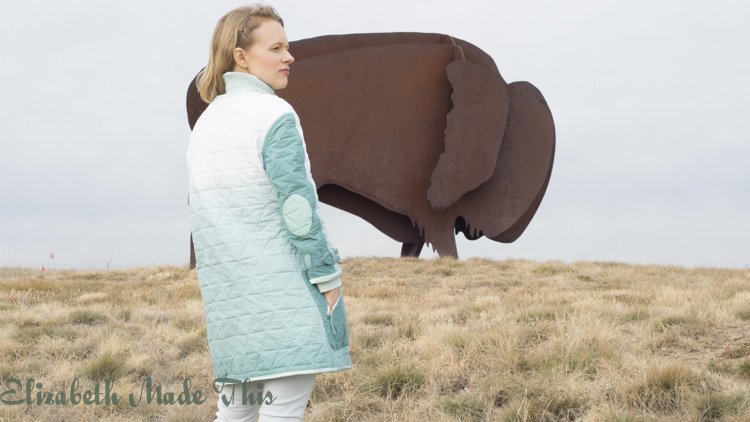 I started with the back piece since it was the biggest piece.  Next, I matched the side seam horizontal lines to the CF to make the next set of horizontal lines.  I kept going around the jacket in this manner, quilting the pieces as I went along.  To do this I stitched on the marked lines through all layers.  It was slow work…I think I clocked in 9 hours to quilt all of the pieces.  A lot of the slowness came from checking and double checking the pattern matching.  The cool thing about pattern matching when you’re creating your own textiles, is that you can do it really on the fly.  There’s no waste of fabric as there would be if you were cutting the pieces from yardage.

Even the zipper shield and the elbow patches are quilted so that the lines match up perfectly. 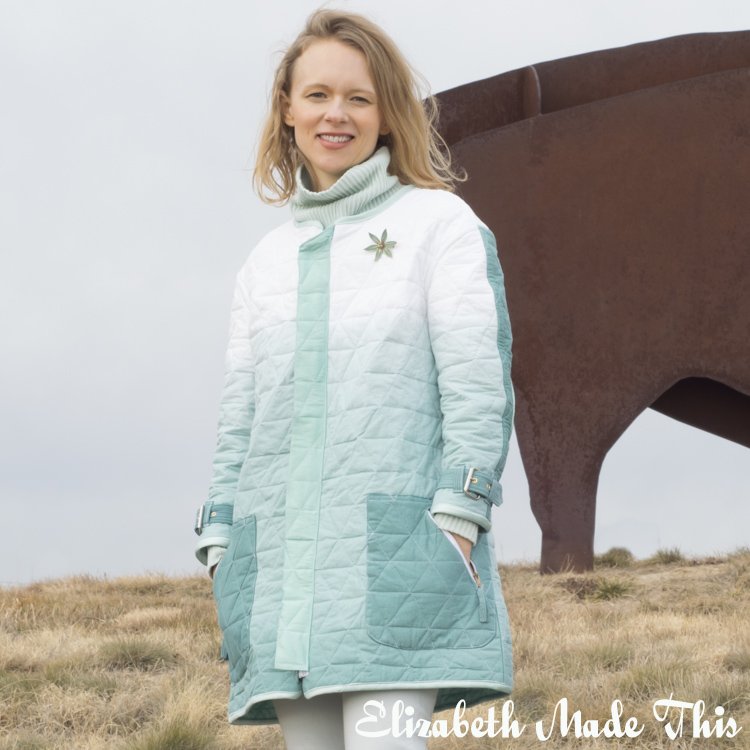 After the pieces were all quilted, I could assemble everything. 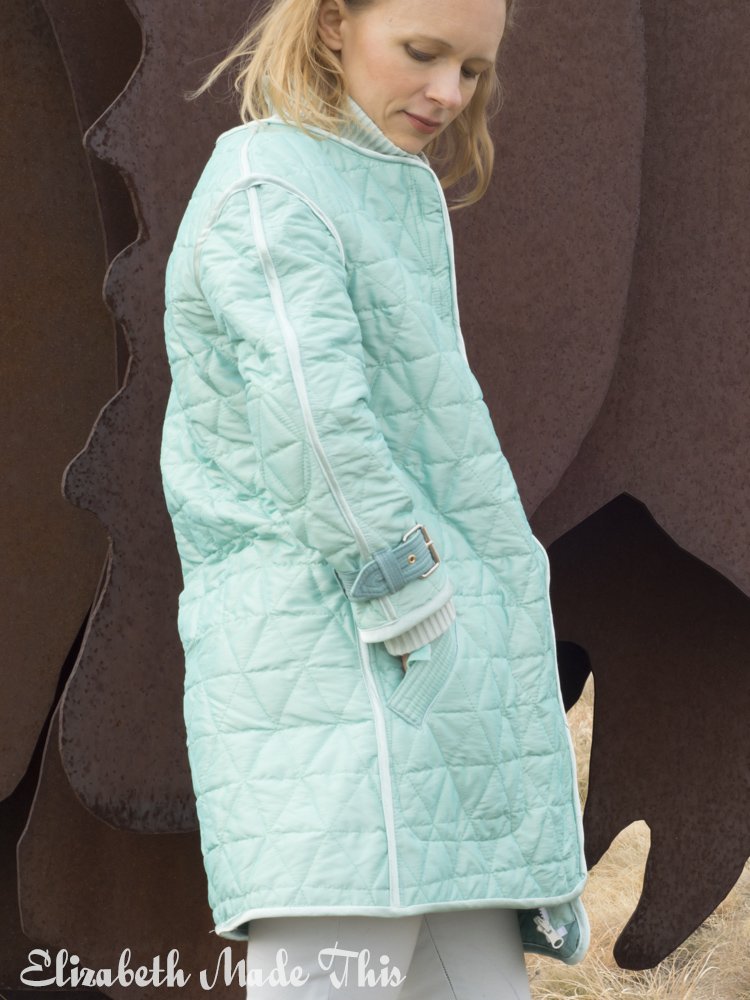 To finish making the coat truly reversible, the seams are covered with bias tape I made from polyester shantung.  I would’ve used the nylon if I could, but I didn’t have enough fabric, and the polyester is a near perfect match.  It was also a little easier to work with as the nylon is incredibly tough.  As every seam was sewn, I folded a strip of bias lengthwise, pressed it and sewed it to one side of the seam.  Because you can’t really press the Thinsulate, I folded the bias completely over the exposed edge and topstitched the tape down.  It’s an ultra clean finish, and I don’t mind the extra topstitching on the reverse side.

Again because of bulk, I only put elbow patches on one side.  I traced off a shape that seemed about right and played with placement until I like it.  The patches themselves are one layer of the nylon quilted to Thinsulate only.  I cleaned up the edges by stitching more bias around the perimeter and folding it to the wrong side before I topstitched the patches down. 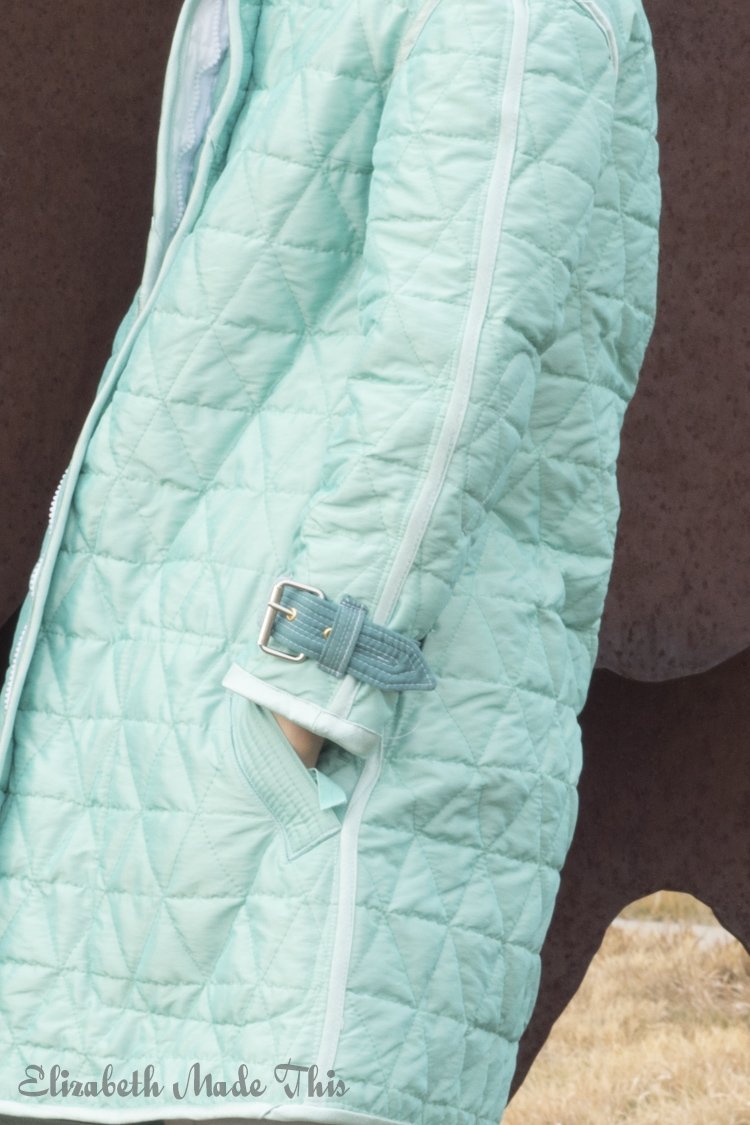 I only made one set of sleeve belts since I didn’t want hardware sitting on my wrists inside my coat.  The buckles were salvaged from a handbag.  There are belt carriers on both sides of the coat.  I decided to add the belts AFTER I had already sewed the underarm sleeves.  UGH.  Terrible decision–it was very tedious to line up the carriers so that they were in the same position on both sides.  I soldiered through it, and besides the pockets, the belts are my favorite detail.

If I had had more yardage, I would’ve loved to do something like this Burberry trench with the ombre: 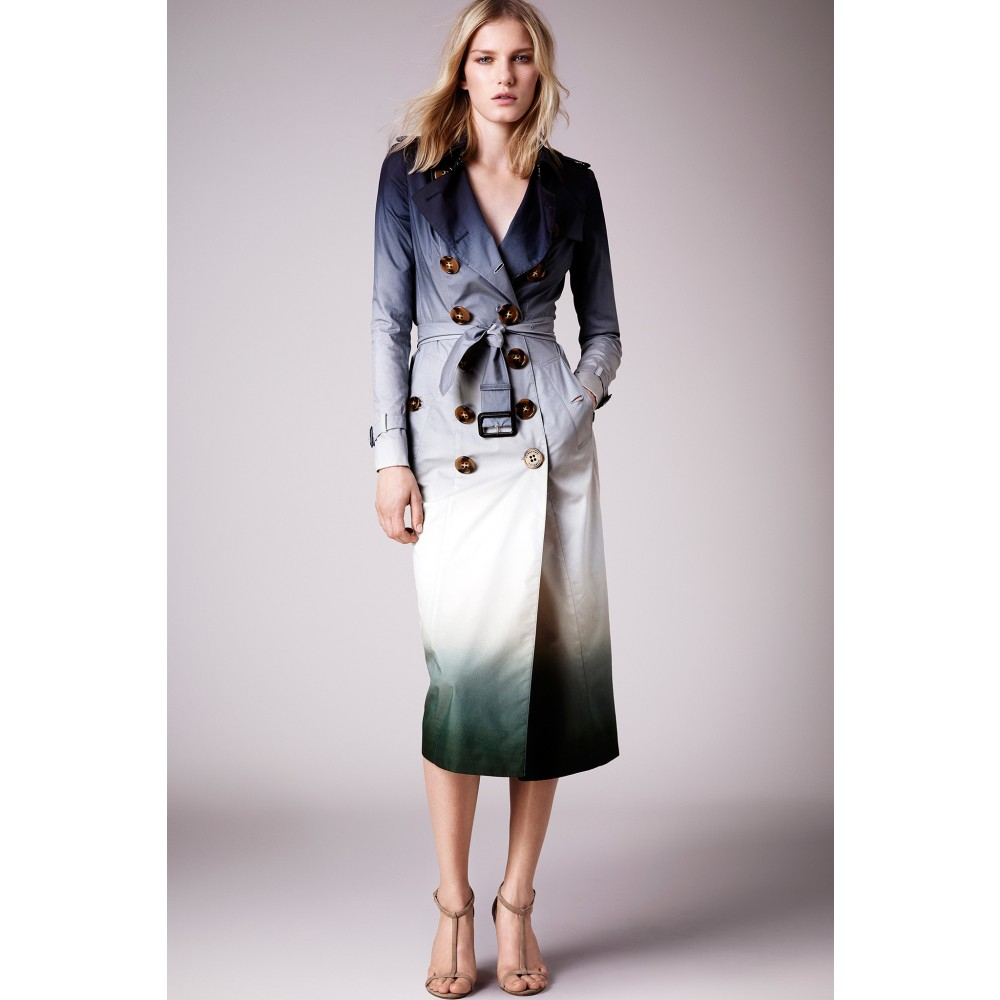 Instead, I went for a simple white down for fronts and back and front sleeves.  The back sleeves got a little more contrast out of necessity, and I used the darker green for the quilted pockets too.  It’s still cohesive around the garment and I think the overall contrast is my style. 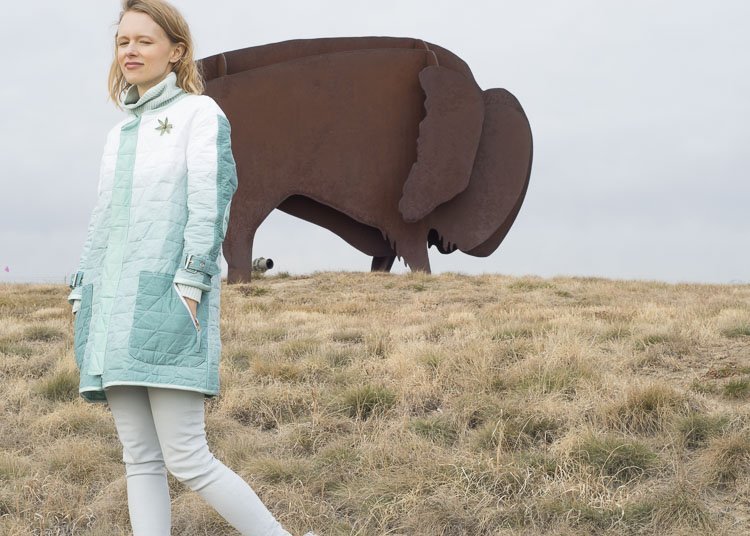 It was the most nervewracking part to put the whole thing in the wash after it was completed to wash out the nasty basting spray and the washable marker.  It came out unharmed, and an air dry was all the Thinsulate needed to retain it’s original loft.

Pound for pound, this was a gigantor project!  It was a great way to finish off the year.  I think this year, more than any other, I have pushed myself and learned so much.  There’s so many projects I’ve made this year that I am truly proud of, and this just might be the queen of them all.

What’s been your favorite project for 2017?