Are you participating in Deepika’s Sew Precious?

When Deepika first announced her #sewprecious2017 pledge on Instagram, I nearly dropped my phone to jump on that wagon.

Join me! Feel free to use this graphic to share on your IG and invite more people to this pledge. Let’s get those pretty fabrics sewn up.

I don’t have a giant fabric stash, but I do have several pricier fabrics that have been hanging around for a long time.  Some of them were purchased with projects in mind that have long since been forgotten.  Others were bought because they were just lovely.  There’s others that haven’t been touched for fear of messing everything up.  Still, you get to the point when you realize what am I waiting for?  As such, I cut into not 1 but 2 of my nicest fabrics for this Sew Precious Embroidered Asymmetrical Skirt.

Sew Precious is about the fabric, and I’ve got 2 here that are just beautiful.  Both of them I bought 3 years ago at Mood LA on a birthday trip with my husband that included a night at the opera.  Fabric is about my favorite travel souvenir.  My mother-in-law catalogs her memories in pictures, and I reckon, I do the same with fabric and opera.

The first fabric is a blue green embroidered cotton.  You’ve already seen it in the trim of this cardigan.  I believe it was labeled voile, but it’s a little heavier than most of the voiles that I’ve sewn with.  There are threads of green and gold running in big loops all over the surface of the fabric, though there are several inches that are not embroidered on the selvedges.  I clearly did not notice the wide plain edges, or I would have bought more.  As such, I only bought 1.5 yards, thinking it’d be plenty for a skirt.  The full width of the fabric was just 45″, and with just over 6″ on either side, I didn’t have much to work with.  If I haven’t gotten around to using this fabric before now, it’s for a lack of knowing what to do with so little.

The color scheme of my Wardrobe Sudoku solved the problem of not having enough of the voile.  All of the greens and blues that I’ve been able to combine in my past several garments gave me some confidence in adding a piece of contrast to the voile.  This pale green Giorgio Armani silk/cotton was the perfect fit.  Not only do the colors blend well together, but this fabric has a similar weight and body of the voile.  The embroidery makes the voile rather beefy, and the added silk makes the cotton have a particular texture that matches the voile nicely.  Both of the fabrics have just enough drape to do what I wanted them to do…

While I look to Ottobre for excellent basics patterns that I can adapt at will, I always reach for Burdastyle for more unique patterns with interesting details.  This asymmetrical skirt (Burdastyle 8-2014-105) is a perfect example.  Take out the draped side panel and it’s a plain slight A-line skirt.  Add the side panel, and it becomes a perfect showcase for interesting fabric. 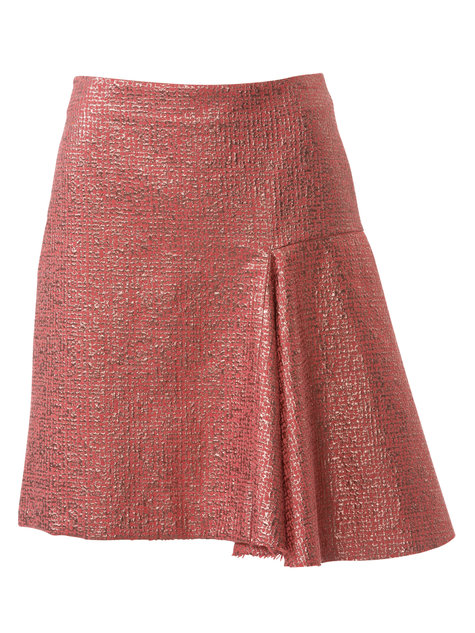 The pattern suggests brocade, so I figured both of my fabrics with their full body would work well.

Construction is fairly straightforward on this skirt.  The only tricky bit is the corners where the side panels meet the front and back.  As long as you mark the seam allowances and sew to the corner exactly, it’ll be no problem.  In some of the pictures, it looks like my corner is puckered, but that’s actually the weight of the drape making a little fold at the corner!  The other issue with the pattern is the suggested hem allowance.  Burdastyle suggests 1 5/8″ (4 cm) which is too deep.  It might be just fine for the straight portions of the skirt, but that deep of a hem on the curved portions of the side drape will = big lumpy hem.  I reduced the hem allowance to 3/4″ which was just right.

I used some of the unembroidered voile for the waistband facing that I trimmed with some bias tape I made for the Hong Kong finish I did on my Alyse pants.  Having the nice smooth voile as a facing was much nicer than the bulkier, textured outer fabric.  Plus it matches perfectly!  The facing is stitched down invisibly by hand because I can’t abide floppy facings.

Business in the front…

While I have never sported or condoned the unfortunate mullet hairstyle (oh the things that are “of an era!”), but I do think the description of “business in the front, party in the back” is hilarious.  As this pertains to my skirt, I had to cut my side drape and the skirt back on the crossgrain to accommodate my shortage of fabric.  While I could have cut both of the side drapes from the Armani fabric, I kind of liked the idea of just having the contrast at the back of the skirt.  Not only could I conserve the Armani for another project, but I get the best of both looks.  Embroidered in the front, contrast at the back.

This is just the kind of skirt that bodysuits were made for.

That big full skirt really does well with the smooth fitted bodysuit underneath.  And I love it with the cardigan too.  It’s a bit of a nod to the styles of the past with a modern twist of the inset side panels. 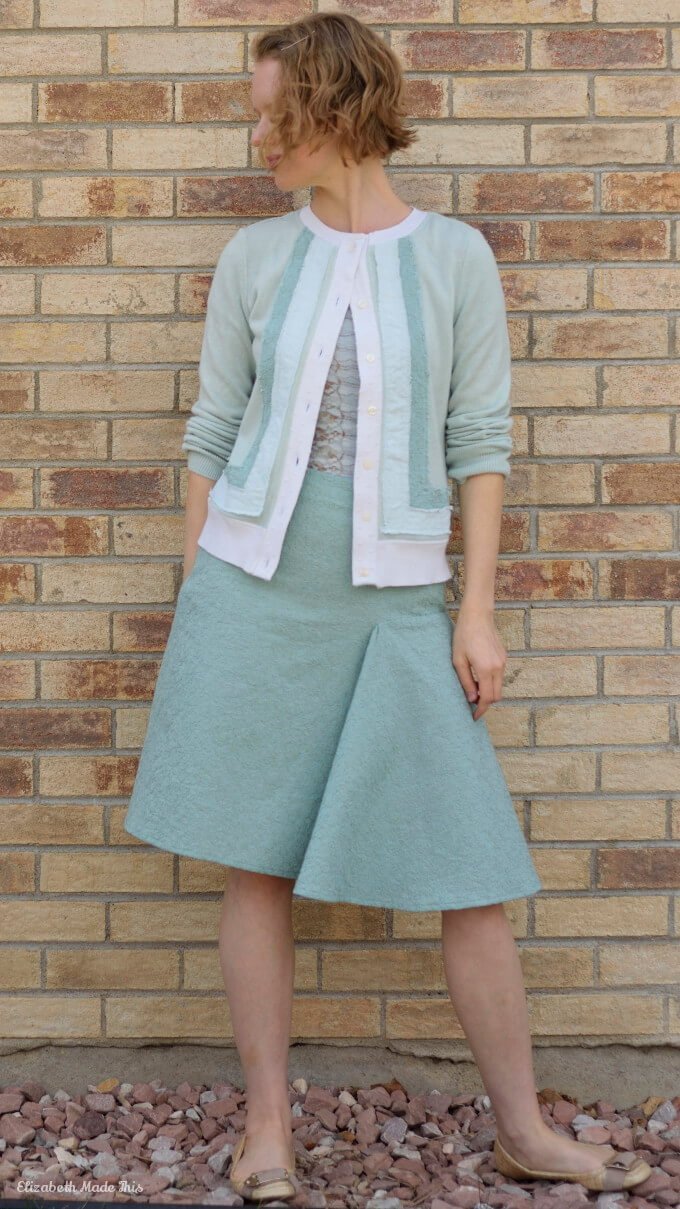